There’s No Going Back

We’re never going to return to the way things were. We never do. We’re always moving forward, even when it seems we’re going backwards.

The Buddhists say there is no “self” in the sense there is no “me” that is carved in stone. We have a sense of self, but that is a construct that helps us move through life. When we think this “self” is unchanging, is something solid, we can believe there is such a thing as returning to what once was.

Once upon a time, we lived as though only our limited view of the world mattered.

Once upon a time, we believed we had become a colorblind society.

Once upon a time, we thought we could do what we wanted to the Earth and its inhabitants.

Once upon a time, in a land far away, things were not as they seemed.

And now we see, and we can’t unsee, unknow all that has come to pass.

So, there is no returning to the way things were. It’s just not possible. And I’m glad.

We may not see the way forward, but I’ve always liked and been unnerved when standing at the precipice. It’s where everything is possible. It’s where we’ll create new “Once upon a times.”

Posted by Joanne Young Elliott at 4:40 PM No comments:

The article below got me thinking about our bodies and souls. So often spiritually oriented people like to call our bodies vessels or wet suits. Those metaphors seem to dismiss the Oneness that I know many believe. The article helped me form a metaphor that feels right to me.

Read the article “A spider's web is part of its mind, new research suggests” first so you can see what I mean.

What if our souls are the spider and our bodies the web? Our bodies are an intricate part of our total being, more than just a tool. We need our bodies to have a human experience. Without them, like a spider without a web, some abilities are no longer there. There are simply some things a disembodied soul cannot do.

The physical realm has always felt like an extension of the unseen one to me. Not just a reflection. It is an extension of the Great Soul or Anima Mundi. We are souls within Soul and we are the web this Great Soul has woven to extend Its awareness and experience. Light extends from darkness. It moves like wind until it becomes almost frozen in time. It slows down and begins to take shape until it becomes something.

And we are always becoming. We extend our consciousness through our senses and even our sixth sense. We weave a web of awareness around ourselves in order to know and understand the world.

The soul doesn’t breathe, but it becomes breath as we breathe. It becomes everything as it extends out into time and space. Even disembodied, I believe the soul is always unfolding once it has become a specific point of awareness. And when it stops becoming, it is absorbed into the darkness, the womb from whence it came.

It all begins in darkness. It begins with a possibility. We are composed, constructed, woven. We come from deep within. We are song, temple, tapestry. We are compressed by our experience into a diamond that holds the light and sparkles like dew on the fine threads of the spider’s web at sunrise. Our awareness grows beyond some unseen horizon until we reach the point where it all began.
Posted by Joanne Young Elliott at 8:58 AM No comments:

You Happen to Life or Life Happens to You 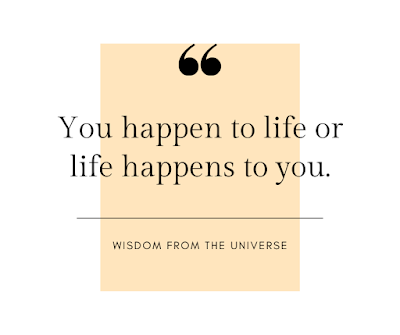 I’ve noticed people are either of the mindset that life happens to them or they happen to life. I used to believe life happened to me. It’s why I spent so many years not doing what I wanted.

During my formative years it felt as though life happened to me. My father died when I was 14. My mother was unable to cope and become emotionally neglectful and sometimes physically absent. It felt as though I had no control over my life. To further ingrain this belief, my mother didn’t allow me to be a part of the decision making process at all.

But at some point it dawned on me. I could do something. I think the first real inkling came from early childhood memories and how I used to fight for what I wanted. It wasn’t easy, and I developed some unhealthy ways of achieving my goals. But I started to realize victimhood was a choice.

There was another moment when it really hit home. My almost step sister-in-law met someone and was asking everyone if she should move with him across the country. She got all kinds of advice. When she asked me, I simply asked her what she wanted. The look on her face was priceless. She hugged me, said thank you and then moved 3000 miles away.

That question came out of my own awakening. And I would move a great distance a few years later based on what I wanted. I finally began to wake up, but it would be years before I began to truly embody that I could happen to life.

This year brought another awakening. It isn’t that I happen to life exactly. It’s that I direct my attention to what I want and let life unfold before me. Life happens and we align with it. But this is still dawning within. I still have yet to embody this greater understanding.

What I do know is that we have to turn away from the idea that life happens to us and step into our sovereignty before we can begin to realize the power of surrender.

May we all enter life from a place of empowerment and know we happen to life.
Posted by Joanne Young Elliott at 3:32 PM No comments:

To Write Is to Cast a Spell

Witches, Pagans and other practitioners of magick aren’t the only ones who cast spells. Writers and poets are also wielders of words and energy in ways that create change.

Many of the words I write come from a place deep within. They rise up from an inner well and are often charged with strong feelings (energy). This is truer of some of the personal blogs, essays and poems I write than a how-to article. But even there I’m casting a spell with the intention to infuse the reader with something they didn’t know before.

There’s a reason we use the word “spell” to indicate putting letters together to create words. Language was probably the first magical tool humans created. Our experience is colored by the words we use. Our thoughts and beliefs are made up of words. These affect our feelings which in turn influence our actions. Our actions create our experience and situations. We are “spelling” all the time.

As writers we utilize this tool to extend our influence. With our words and works we can change hearts and minds. We move people with what we write because we were first moved. If we don’t feel our words, other won’t either.

The word made flesh isn’t just the creative power of the Divine becoming form, it’s the power of our writings/spells to become not only a real experience in the reader, but an influence that pours into the world through the reader now changed.
Posted by Joanne Young Elliott at 12:00 PM No comments:

Even the beautiful flower must let go of its petals. When the petals are no longer needed they simply fall away. Letting go is like that. It’s a natural process. It’s a necessary process. When we let go, so much more can happen. The fruit of our being can grow.

I’m still learning to do this with grace, but I understand more than ever that letting go of everything allows things to fall into their proper place. It’s true when I write, and in my creative life it has become easier than it once was. It’s also true in life. That’s where I have trouble letting go. I hold onto those petals, the things I know.

The ways of doing and seeing that feel comfortable can block what is yet to come. And there is always a “yet to come” in life and beyond. Even if you believe there is nothing beyond the physical, your body will transform and become the earth and the plants and the air. Even the fruit is not the point. It is all ever becoming.

To hold onto anything is to block this natural process and flow. Sometimes we even try to make things fit where they don’t belong. But we will discover there is magic in letting go. Look at the flower. The flow…er. Its name reminds us that it is just one stage in a process. Once it’s been fertilized it knows it’s time to move on and become the fruit that holds the seed of its continuation. But it’s not just the seed that holds promise. Those dropped petals become food for the plants all around. When we let go of things they can then find their next true place. When we let go of old ways and thoughts the next stage of our growth can take place.

The irises in the front garden are huge and lovely. Their petals stand tall and announce life with their color and shape. I can stare at them for hours. Each one is a beacon and has a purpose. Beyond reasons of reproduction though, each iris seems to be here to share its beauty and remind us to look closely, for its existence is brief.

The iris pictured above will soon become seed. And so the process continues. There is no end to the becoming. But while I’m in this moment with this flower, I glimpse eternity.
Posted by Joanne Young Elliott at 12:37 PM No comments:

Joanne Young Elliott
Joanne is a poet and writer who has always been attracted to the spiritual realm. From an early age she was playing with words and wondering about the world of spirit. Today she is a spiritual guide and teacher. She calls herself a Word Priestess because she believes in the power of the written word to transform and heal. Joanne is a Licensed Science of Mind Practitioner and an Ordained Priestess in the Fellowship of Isis. She lives with her husband and their two thousand books just outside of Los Angeles.